March 31st marks the end of the OASIS data collection period for flu vaccinations for Medicare patients on service. “Influenza Immunization received for the current flu season (M1046)” is one of the nine Quality of Patient Care Star Ratings and one of the twenty-one new HHVBP measures. With both reimbursement and ratings at stake, agencies need to closely track all patients on service during the months of October through March, to ensure they accurately record this measure. Remember—the coding occurs at the time of transfer or discharge, not at the SOC, so March 31st doesn’t end the data collection.

With March coming to a close, it is important to intensify your efforts so that patients whose episodes start before the end of the month have access to the flu vaccine."

While there is an OASIS Item (M1041) that is used to indicate whether or not the episode of care included any dates that overlapped the flu season, CMS does not use the answer to M1041 to determine if the measure will be calculated for a given patient. Instead, CMS uses the M0030 (SOC Date) and M0906 (DC/Transfer/Death Date) fields to determine if the episode of care overlapped the flu season. If the episode included any dates from October 1st through March 31st, any of the following responses will result in the flu-vaccine process measure not being met:

4 - No; patient offered and declined

5 - No; patient assessed and determined to have medical contraindication(s)

7 - No; inability to obtain vaccine due to declared shortage

8 - No; patient did not receive the vaccine due to reasons other than those listed in responses 4 – 7

We recently pulled data across our national database and made some interesting observations. The number of patients for the flu-vaccine process measure drops precipitously after March and before October. That makes sense, but note it is not zero. The quality scores also go down during these months, which gives a look of seasonality to the measure. 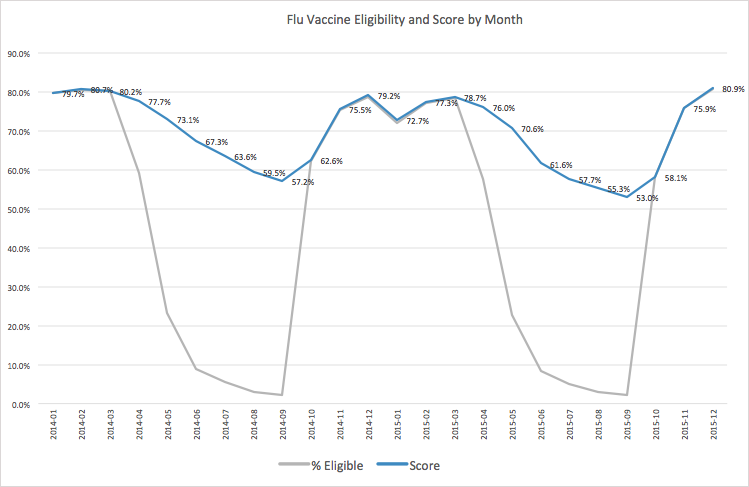 This demonstrates where there may be opportunity to improve your scores, in particular for episodes ending in April or starting in September. Any patients admitted in March will need to have a flu shot even though they will be discharged likely in April or May. Since the coding of M1046 occurs at transfer or discharge, the assessing clinician needs to verify the status of the patient’s flu shot even after the flu season is over. This may be overlooked or not pursued the further away the SOC began. We see a similar phenomenon for patients discharged in October and November. Many of these patients had episodes of care that started in August and September and continued into flu season. I believe that with many protocols for checking and creating standing orders for influenza occurring at admission, some patients are being missed, which leads to lower scores.

With March coming to a close, it is important to intensify your efforts so that patients whose episodes start before the end of the month have access to the flu vaccine.

Chris Attaya
Vice President of Business Intelligence
With more than 28 years of experience in the home health and hospice industry, Chris joined SHP in 2014 and is responsible for product development and helping clients achieve increased operational and financial performance.